Everything starts in summer 2011, when i had to prepare antennas for the upcoming 2012 Pacific DXpedition (VP6T, TX6T, E51BKV, FK/F4BKV). I was always impressed by the strong signals VP6DX (Ducie Isl.) got with their VDA and I tried to make similar (but lighter) antennas that can be transported by a single man in his luggage. I got precious information from Cornelius DF4SA, the founder of Spiderbeam, and I was also helped by Jacques F6BEE for the calculations and modelisation part with MMANA-GAL software. It then took me a few days to get the first prototype assembled, the most challenging part was to find a solution to build the cross arms as light as possible. At the end, each antenna has a total weight of 1.5kg (including the 10m fiberglass pole). Below you will see some explanation on the performances and some indications on how to build it.

As with all other vertical antennas, you need a good ground to get the antenna working efficiently. VDA are no exception and based on my own experience, I would even say they are more sensitive to the near ground. In other cases, and to be more clear : If you do not plan to install your antenna near the sea water, then forget it and look for some other antenna designs. The VDA is performant ONLY near the sea water, and with the sea in the path to the DX. While in South Cook, I made an interesting experiment on the 28MHz band. My operating shack position was 100m away from the sea shore, and I decided to build the 28MHz VDA near the shack, in order to save coaxial lengh and reduce the loss in the cable. But after one day and poor results, i decided to move this VDA near the seashore and connect it with 100m of low-loss H155 coaxial cable. For sure, the loss in the coaxial was still higher than when the antenna was only 15m away, but the fact that the antenna position was on the sea shore gave me much better results on this band. So again, when I say this antenna is to be located at the sea shore, it's not only because photos are more beautiful with the sea in the background .. the salt water is playing a major role in the antenna radiation performance.

As you can see, the forward lobe is broad, and it's an advantage as you do not really need to turn the antenna, especially if you can get US/JA/EU in this main lobe. There is a very high attenuation at 180° and it's very sharp. I found it very useful, especially when you are on an island, because the antenna is directed to the open ocean and the attenuation is on the local noise (qrm/qrn etc ..) coming from the beach and houses located directly behind the antenna. In multi transmitter environment, it also reduces interferences between stations if the antennas are properly oriented. I was really surprised by this strong attenuation, both during my tests and also in actual operation during my trip (for example, in FK, the 180° was towards ZL and it was extermely difficult to contact them while I had no problem to work EU/JA/US, located 10000km further than ZL !). You can also notice the relatively low elevation angle (14°) of this antenna that takes advantage of the low angle of arrival of DX signals.

The following table summarizes the theorical dimensions of the antennas (in meters). Do not start to cut your wires from these values without knowing the velocity factor of your wire. For example, the Spiderbeam CQ-532 stranded copper wire has a velocity factor of about 0.96. It means that the following values have to be multiplied by 0.96 to get the real physical length of the wires.

When we initially start planning for Tromelin Island Dxpedition FT4TA, the choise of using VDA quickly become obvious. I was assigned the task to rebuilt a complete set of VDA for 20m to 10m with a more robust design, so it can stand strongs winds and will not fall down on protected wildlife of Tromelin. I also started to use EZNEC and made new modelling of the VDA. I also had to test each of them in my garden before packing in the container, so you can see on this page the result of the analyser in comparison of the theorical SWR values of EZNEC. In addition, in the design, I included a DX-Wire ferrite choke made with coaxial cable, inserted just after the center isolator of the driven element.

On the next version of the VDA design, I will also change the end insulators of each elements, by stronger ones, so it will not burn the rope when you apply 500w of power in extreme salty conditions (like on Tromelin). Otherwise, this new design proved to had worked very well, and the antenna was far better efficient than the SteppIR 2elts Yagi (at 8m above ground) we had as backup. One interesting side note is that the VDA were about 50 to 60m away from the ocean, at the egde of the beach, and the effect of this distance (also modelled in EZNEC) is not impacting that much for DX angles, just loose a bit of gain.

Below you will find the EZNEC Patterns, the SWR values (theorical and real) and at the bottom of the page, the EZNEC files to download so you can experiement by yourself. 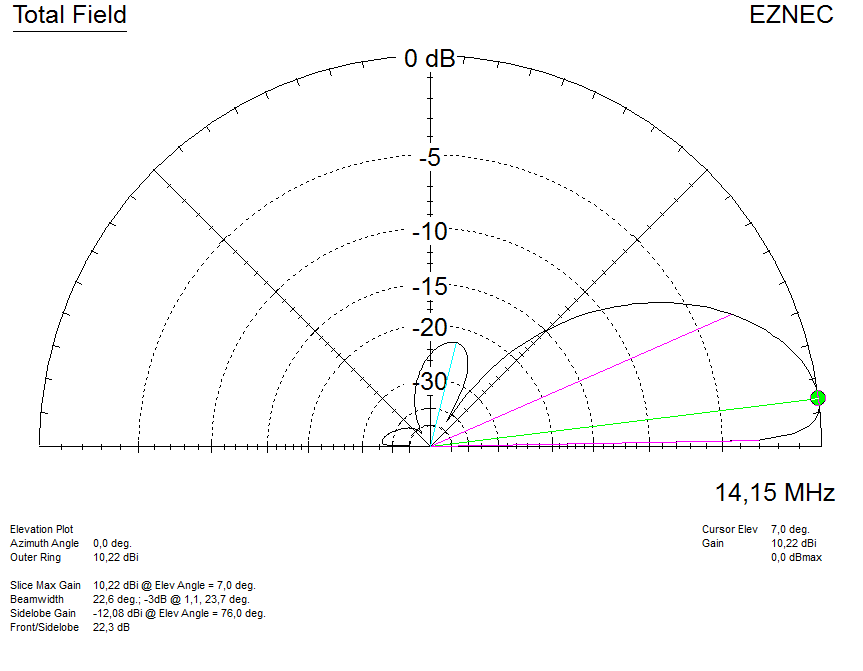 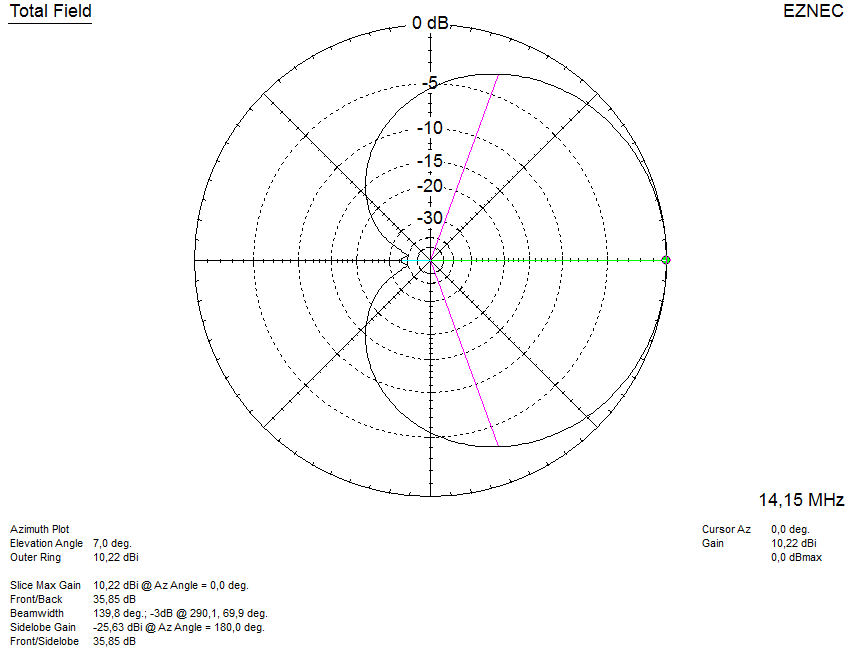 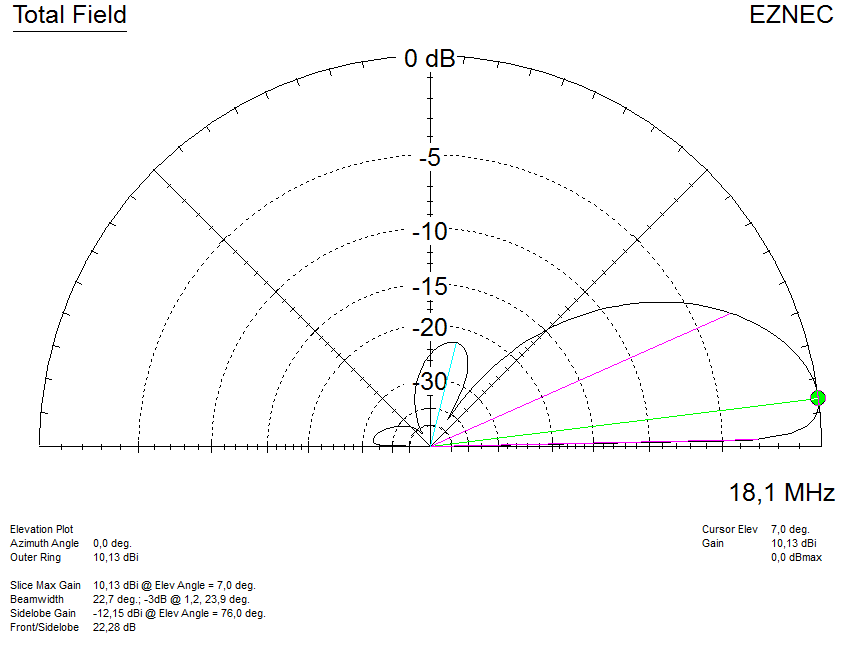 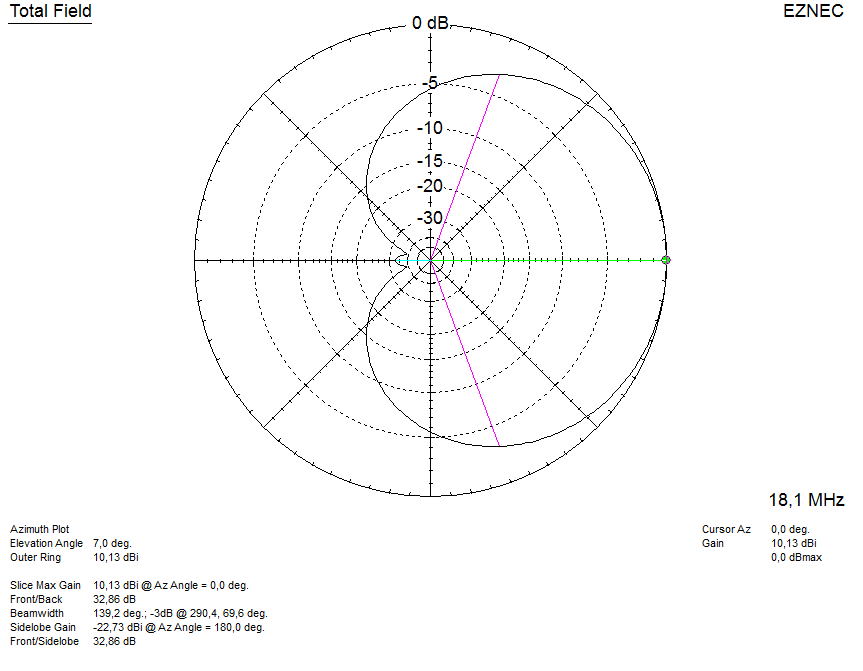 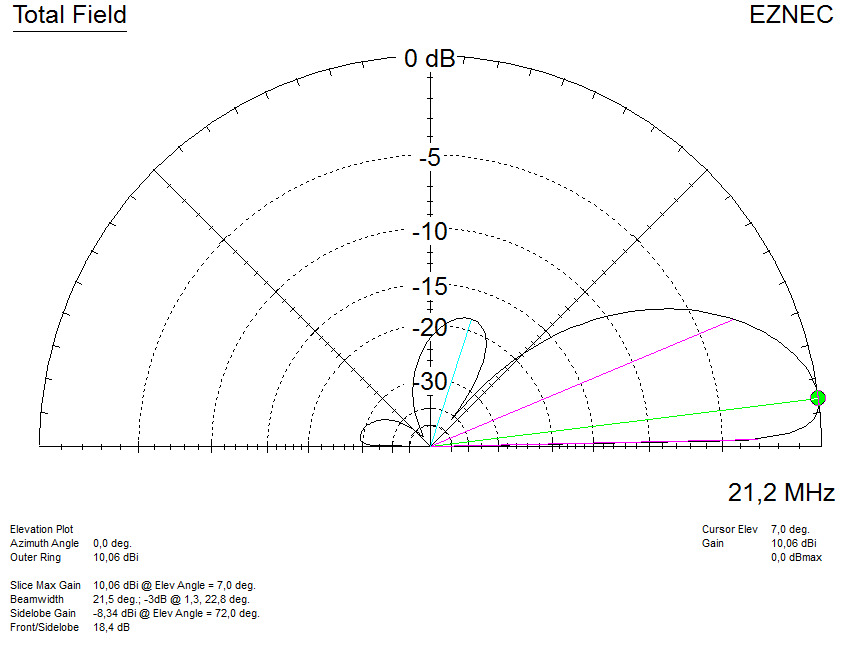 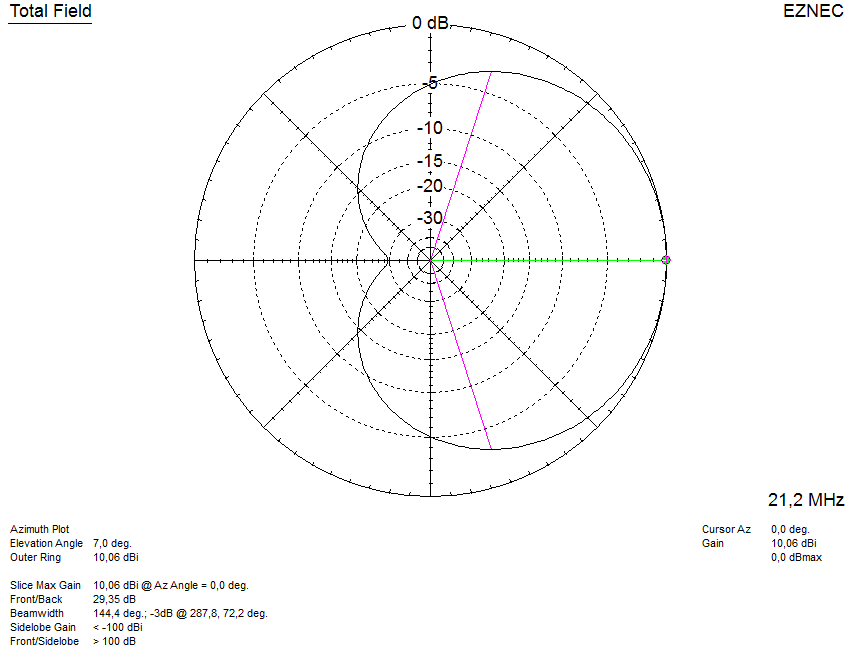 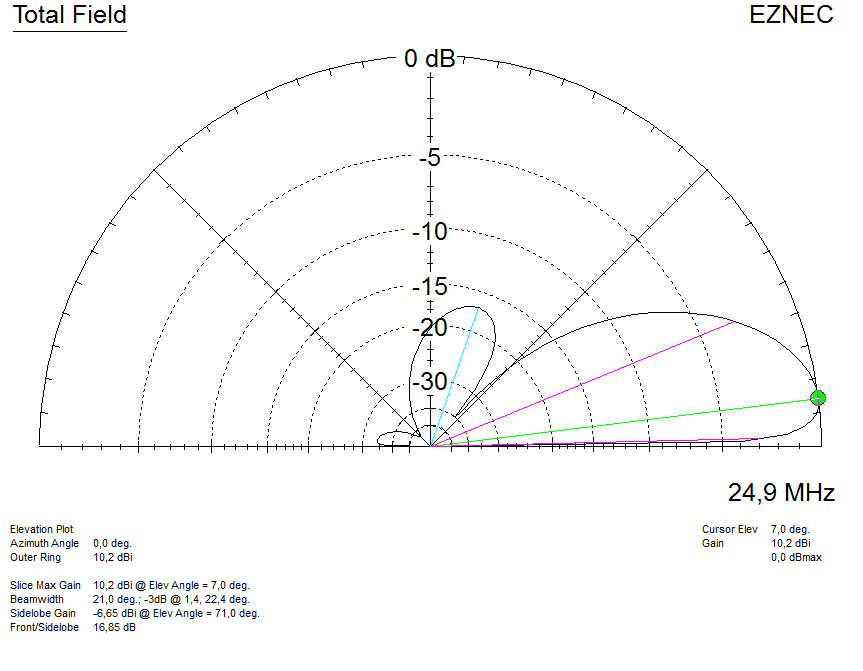 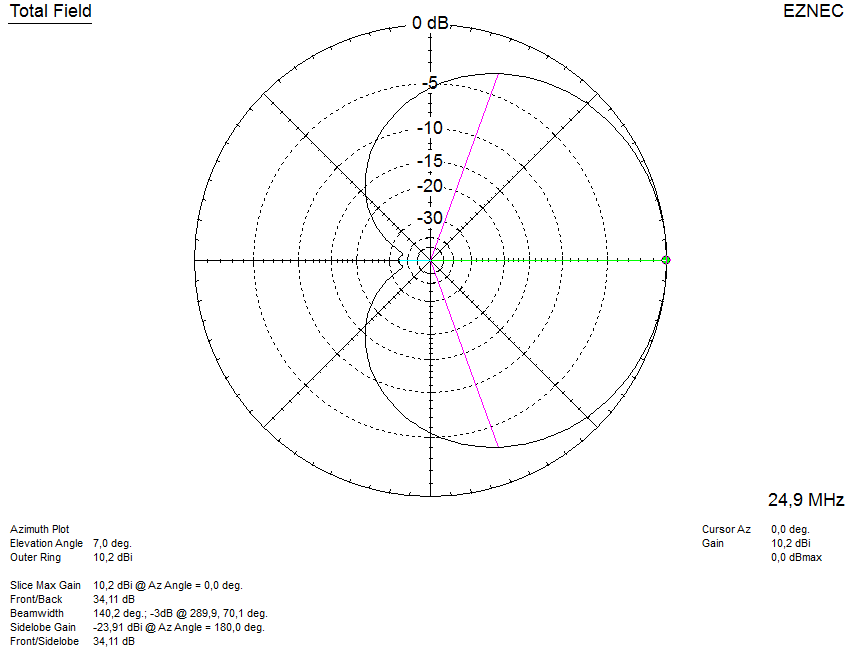 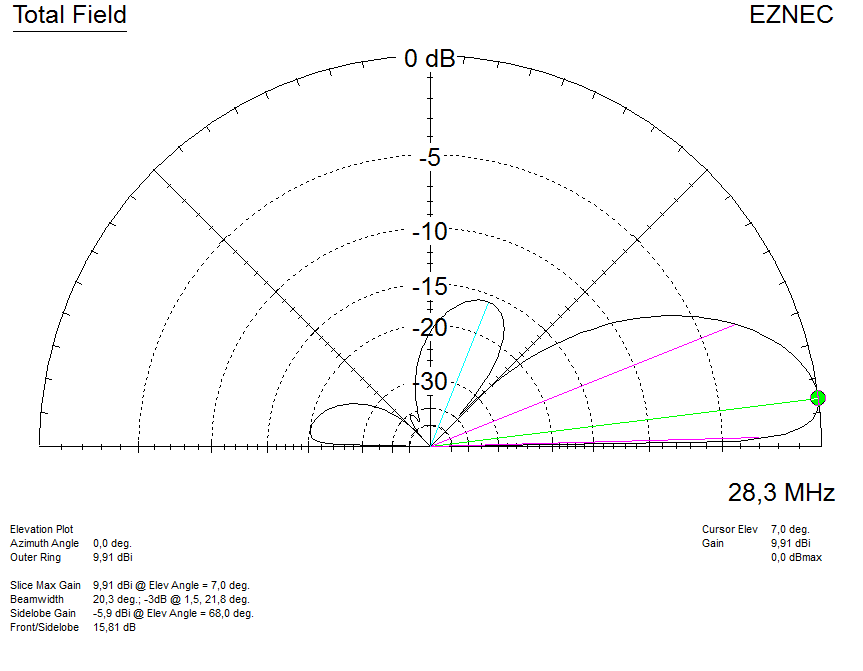 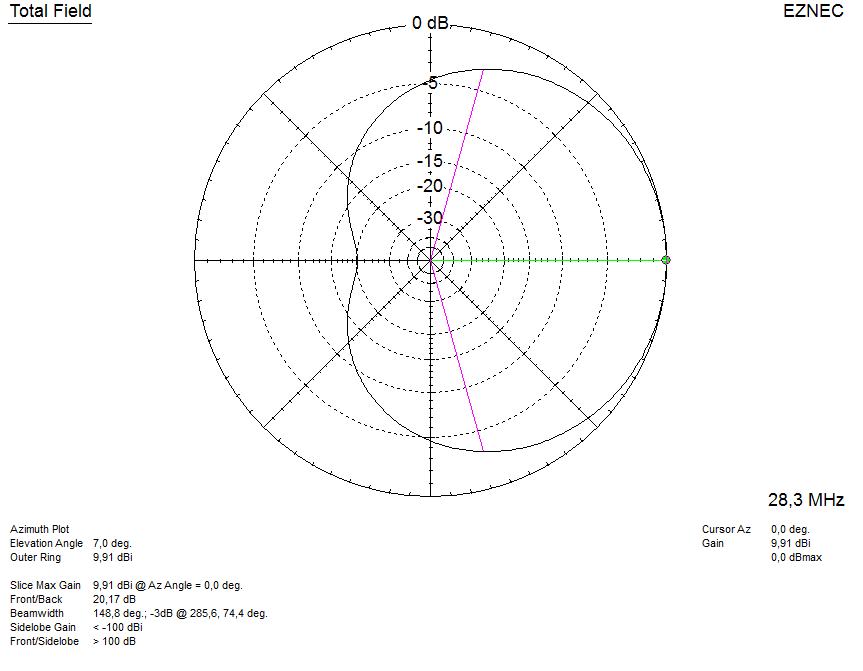 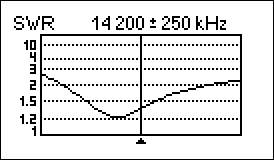 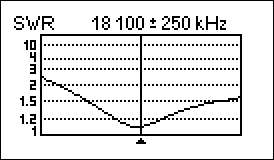 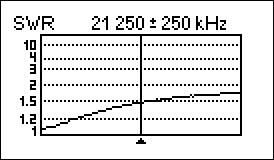 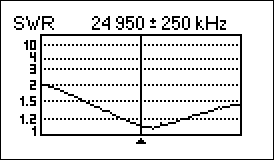 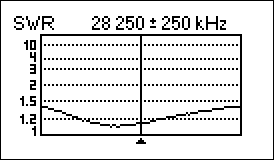 Now I believe you have all the details to experiment your own. I'm available for any further questions or details. 73 de F4BKV Vincent